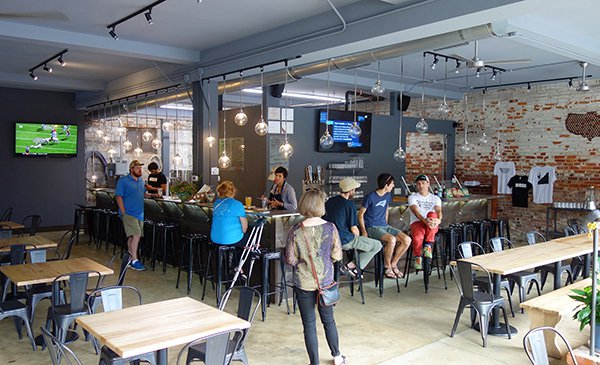 Since opening in August, Thirsty Souls Community Brewing has become a gathering spot in downtown Mount Airy. The large garage door that opens onto Market Street reveals a spacious, welcoming taproom and invites patrons inside to sample beers and take a tour of the brewhouse.

Thirsty Souls produces 12 beers. White Ghost hefeweizen, the flagship, was supposed to be a summer-only beer but became so popular it earned a year-round tap. The brewery’s name and several of the beer names, such as Hoppy Souls IPA and R.I.P.A., pay tribute to the location’s former tenant, Moody Funeral Service.

“People love coming in because we have really good beer, but also because it’s such a friendly and open environment,” says Scott Hauck, bar manager and assistant brewmaster.

Many brewery customers also spend time shopping along Market Street. This past fall, Thirsty Souls and White Elephant Beer Company, located across the street, teamed up for an Oktoberfest celebration, and they plan to do more joint events in the coming year.

Hauck and owners Jan and Maria Kriska all work full-time jobs away from the brewery, so they tag team the hours and appreciate the support of local residents. Hauck is a firefighter for Mount Airy Fire Department, Jan is a sleep medicine doctor with Blue Ridge Medical Group and Maria teaches biology at Surry Community College.

The logo for Thirsty Souls — the silhouette of a hiker scaling a mountain with a keg on his back — came from the Kriskas’ European heritage. Natives of Slovakia, they both had summer jobs trekking goods into remote areas that could only be serviced by foot or helicopter.

“The most rewarding part is the customers who want to be a part of what’s going on,” Hauck says. “We have regulars who just want to get involved in any way they can. They call and ask if I’m brewing and then stop by and pick my brain about the process.”

Live music takes place on Friday and Saturday nights, and a pizza food truck called Hungry Souls is in the works.